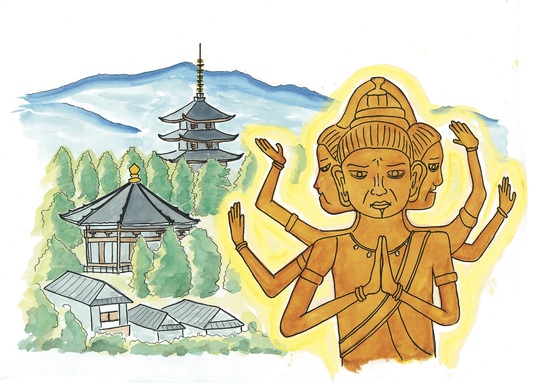 This is a story from the era when the Fujiwara clan was flourishing, in the seventh century.

*1Taishokukan *2Fujiwara Kamatari’s daughter Kohakunyo was such an exceptional beauty that word of her had reached all away across the ocean to China. The Tang Emperor Gaozong of China sent an emissary to Japan to request permission from Kamatari that the Emperor would
be able to receive Kohakunyo as his Empress. 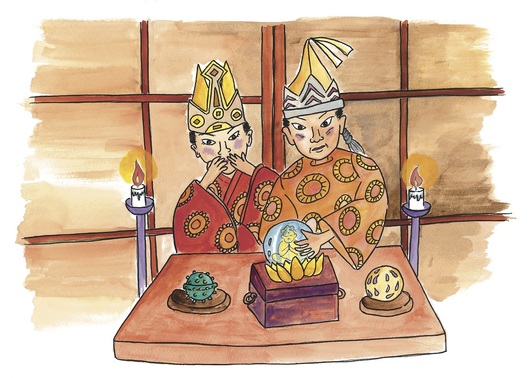 One day, in China after they were married, Kohakunyo told her husband that she wished to send a gift back to her father, Kamatari. Immediately the Emperor led her to the storehouse,where they selected three treasures. One of them was a crystal jewel called Menkofuhai.
No matter from which direction one prayed before it, the countenance of the Buddha in the jewel always faced the worshipper. In order to send the treasures by boat, the Emperor selected the great warrior Manko of Yunzhou Province and dispatched him to Japan. 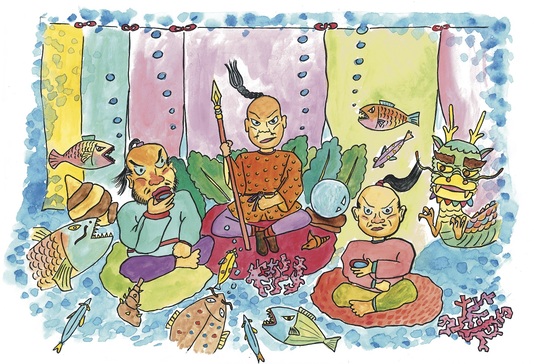 The Dragon King lived under a palace in the sea. Upon hearing that the treasures were to be sent to Japan, the Dragon King gathered his clan to devise a strategy to plunder the shipment and take the Menkofuhai jewel. 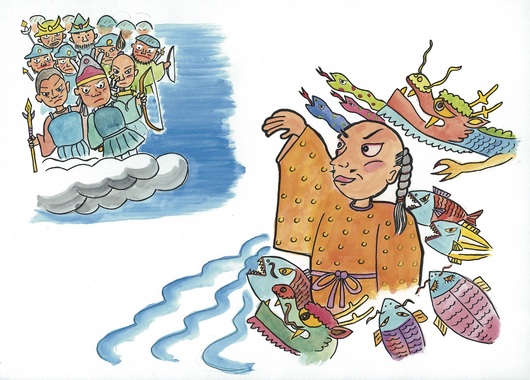 The Dragon King called the always battle-ready Shura King and his henchmen down from the heavens. They decided to circle ahead of Manko's boat to lie in wait for him there.

When Manko reached the boundary waters between Japan and China all of a sudden lightning flashed and torrential rains began to fall. An island appeared before them,and they saw numberless arrows flying toward them.

Finally, they heard a voice that echoed in the sky. "I am the Shura King. Relinquish the jewel!"
In the next instant huge stones and blades hurtled toward them like a flurry of snowballs.

Without flinching, the warrior Manko, astride his horse and wearing helmet and armor,continued to fight.

“Oh no, I’m no match for you!” cried out the Shura King as he attempted to flee at breakneck speed. Brandishing his sword, Manko cut off Shura's head. A spray arose as he sank into the sea.
Alarmed, Shura’s underlings turned tail and hastened to flee.