The Lacquered Hat of the Genji Part5 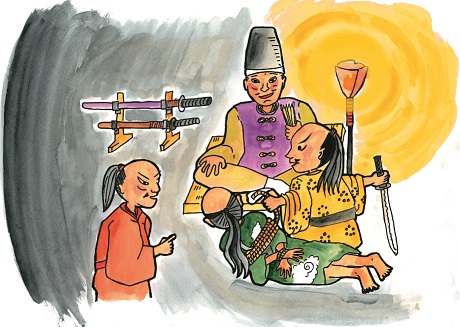 In Hirugakojima in the province of Izu, Ushiwaka’s brother Minamoto no Yoritomo of the Genji was in the midst of developing plans along with the other lords of the Eastern Provinces to destroy the Heike when Kon’omaru suddenly appeared.

“The Heike are having their way in the Capital. Everyone is praying that you will attack and destroy them. Lord Ushiwaka will be coming here in the company of others after he completes his pilgrimage to the Ise Shrine. But, I have hurried here ahead of them because I wish you to see this gift of 'fresh fish' that I have brought to you before it begins to rot.”
He presented the tightly bound Osada no Tadamune.

“This is the abominable, poisonous pufferfish that took the life of my father Yoshitomo,”said Yoritomo, laughing as if pleasantly.
“Let's serve him up immediately.” He passed a long halberd to Kon’omaru, who took it in hand,leapt for joy, and cut off Osada's head. Tossing it in the air, he caught it on the end of his sword,and presented it before Yoritomo, who was overjoyed that at long last he had been able to vanquish his father's enemy.

During that time, Ushiwaka had gone to Ise Shrine with Shinonome.

The main hall of the Ise Shrine was solemn and sublime. Within the shrine precincts were more than 120 smaller shrines. Ushiwaka made his way around each of them, considering how Ise Shrine was the wellspring of all of the various gods. 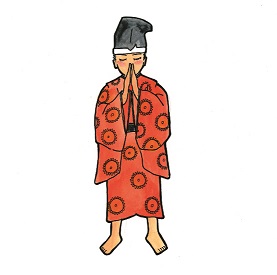 He bowed many times over at the Isuzu River, praying that this world would continue for ages. 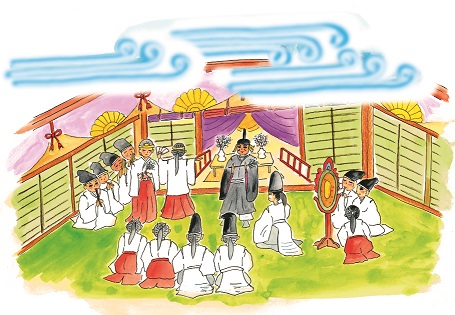 Thereupon Morinaga, Yoritomo's close associate, arrived on the scene with many troops.

“Master Ushiwaka, I have come to greet you.”

Ushiwaka was overjoyed. Immediately calling the all the shamans from the inner and outer shrines,he had the sacred Grand Kagura ritual performed.
As if the strains of the courtly gagaku music were purifying their hearts of all the wrath, malice,and hatred, white clouds began to billow in the sky, glistening and trailing like white flags of the Genji. 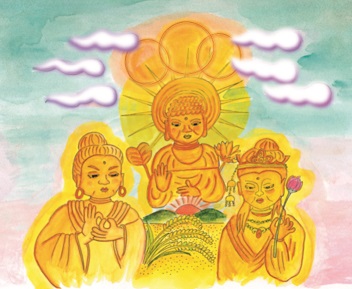 From within the clouds appeared the gods of the three grand shrines, Ise, Iwashimizu, and Sumiyoshi.

“The future of the Genji shall continue for ages. And may divine protection continue, for bounteous crops and land abundant, and for the happiness of the people.”
The three then changed into the three true Buddhist forms of Amida, Shaka, and Kannon.

Ushiwaka, filled with delight, prayed before them.

At long last, in accordance with the prophecies of the gods, the army of the Genji had crushed the Heike.
The Genji and the whole nation flourished. Peace descended on the world, and all people rejoiced.