The Lacquered Hat of the Genji Part2

The clan was gathered at the mansion of Taira no Kiyomori. Kiyomori's anger was fierce.
“With such small children in tow, they cannot have escaped very far. Find them, even if you have to turn over each blade of grass,” he commanded his men. “If you discover anyone suspicious,seize them.”
Sending official notice to villages and towns in every corner, he dispatched over 300 men in pursuit in all directions. 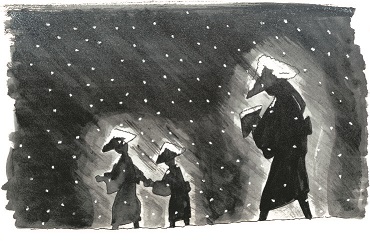 With nowhere to turn, Tokiwa and her sons were at wit's end as they stumbled on.
Snow continued to fall, and their feet were cold.

Suddenly, a house came into view.
A small light burned in the distance along a road that stretched from a bamboo grove. 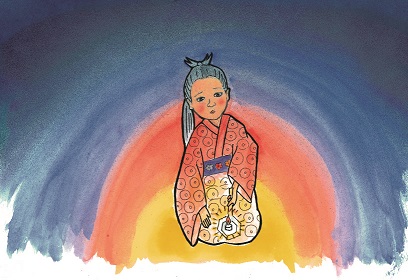 Following the light to the house, Tokiwa called out, “We became lost in the snow.
I have small children with me. Could you perhaps allow us to stay tonight?”
A young woman carrying a candle emerged from within.

“I want very much to put you up for the night, but I was ordered by the Heike men that I should report anyone suspicious. My name is Shirotae. I am the youngest sister of Tokuro Morinaga, whose family served the now- defeated Genji clan for generations.
But I am the wife of Yaheibyoe Munekiyo of the Heike now. My husband will be home soon.
And there will be misery if he finds you. Please, flee while you still can.” Thus warning them,she blew out the candle and went back inside. 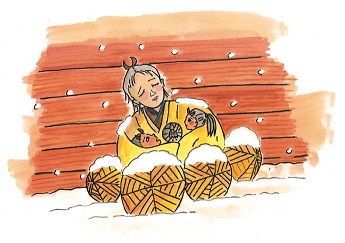 Taking off her quilted garment and spreading it out on the snow outside the house beneath the eaves, Tokiwa spoke to her sons. “We will stay here until dawn.” She made a bed, propping up straw hats to help block the wind.

The snow grew ever more furious. The wind on their skin felt like the chill blade of a sword.
In the extremity of her fatigue, Tokiwa Gozen shuddered in the cold and began to lose consciousness.
Shocked at her state, Imawaka and Otowaka took off their outer clothing and covered their mother.
Whereupon, she took off the garments and put them back on her boys. But they removed them again and put them back on their mother.

“Mother, we are not cold. Those who would be warriors are prepared to go to battle despite any amount of snow. Isn't that right, Otowaka? You cannot admit to being cold.”
“That's right, brother. You mustn't say you are cold.”

Hearing their two voices, Ushiwaka awoke. Following his brothers' example,Ushiwaka took off his own garment and put it over his mother. Shivering, he gritted his teeth and clenched his fists.

“Even with no covers at all, I could feel warmth radiating from within your hearts.
Come here, boys.” She drew them close and cried.

About then, the husband, Yaheibyoe Munekiyo, returned home. “What? This looks suspicious.”
Removing his straw hat, he strained his eyes in the dark to see.
Surely this was Tokiwa and her children. Quietly he listened to their exchange as the mother fretted over her sons and the sons cared for their mother.

“It's such a pitiful scene. I want to help them in some way, but if I let them escape,I would be betraying my Lord Kiyomori.” Pretending he had not noticed the family,he went inside the house. 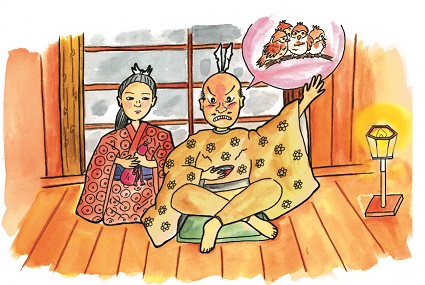 Shirotae greeted her husband Munekiyo with warm saké. After a while, attempting to probe her husband's feelings, she asked, “What would you do if someone connected with the Genji clan were to show up here?”

Thinking perhaps his wife was aware of the family outside, Munekiyo responded,“It goes without saying. Kiyomori commanded it, and so if I were to find anyone, I would take them prisoner and haul them in. But, what I actually mean is that I hope we don't discover any suspicious
people or learn anything about them.” But, overhearing the voices of the mother and sons under their eaves. Shirotae's face tightened. Hearing it too, Kiyomori spoke.
“Those birds outside are so noisy. I'll chase them away.”

But Shirotae responded, “I imagine the little sparrows may have injured their wings.
They're just spending a single night beneath the leaves of the bamboo that is bent over with the snow. Don't concern yourself. It's time to go to bed.” 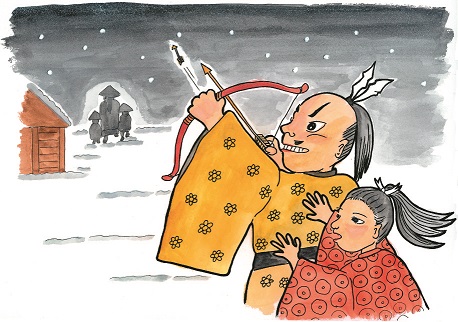 Munekiyo would not listen to her. “No, I'm going to chase them away immediately.”

Shirotae disagreed. “They've made their nest here for now, so they are not likely to leave,even if you chase them off.”

Munekiyo grew angry. “You stupid woman.” He hurried outside with his bow and arrows.

Shirotae tried desperately to stop her husband, but he pushed her aside.
Munekiyo shot four or five arrows into the air. Startled at the sound, Tokiwa fled in haste with her three boys. Confirming the sight of their retreating figures, Munekiyo spoke as if relieved,“Look at that. The sparrows have flown away.”
Viewing this scene, Shirotae realized that Munekiyo had let the mother and children escape.
“Neither the boys nor their mother are likely to forget the debt of gratitude they now owe.”

Whereupon, Munekiyo turned to his wife. “What are you saying? Those were sparrows,just sparrows.” He made certain that she understood.