The Lacquered Hat of the Genji Part4 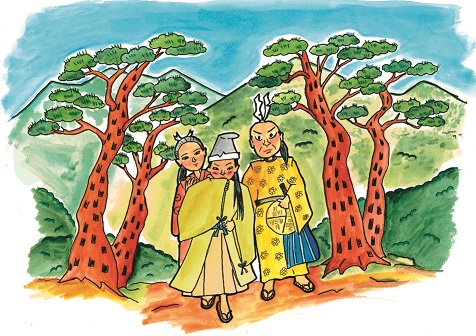 Since autumn of the previous year, Yaheibyoe Munekiyo and his wife Shirotae had spent their time walking carefree in the nearby mountains and meadows, making a spiritual pilgrimage to the temples of the deity Kannon.

One day, a boy of about 15 or 16 passed by them, with the sleeve of his courtly robe held to his face as if to conceal his identity. They approached him and tugged at his sleeve.

“Might you be the Genji warrior Ushiwaka?” they whispered.

“Yes. I am Ushiwaka. You must be people seeking me. There is no escape for me.
Take my head now. Deliver it to Kiyomori and collect your reward.”
He spoke with an unconcerned look on his face. 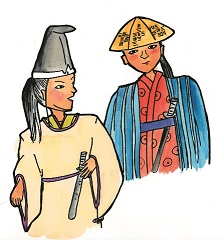 “When you were yet a child, we assisted you and your brothers in the village of Fushimi.
There is no need to worry.”

The boy appeared relieved to hear this.
“Actually, I am not Ushiwaka. My name is Shinonome, the daughter of the eboshi hat shop owner Gorodayu. Crazed by greed, my father tried to turn Ushiwaka over to Taira no Kiyomori of the Heike. But, just in time, Kon’omaru saved Ushiwaka.
However, my father's older brother, my uncle Raigenboshi lodged an appeal to the Heike,and now he, along with the warrior Kenmotsutaro Yorikata, have set out with troops in pursuit of Ushiwaka. I am the wife of master Ushiwaka, so I determined―if it would help him to flee even a bit farther away―I would disguise myself and use his name.
That way I perchance would be cut down instead by those seeking him, thus slowing their chase,”
she said with tears flowing down her face.

Munekiyo and his wife admired the young woman.

Munekiyo then instructed Shinonome to travel together with his wife Shirotae to seek Ushiwaka.

“I shall remain here. And when I meet Kenmotsutaro Yorikata, I'll distract him with a long story.
And while I'm doing that, you'll be able to travel a greater distance ahead.”

Donning her husband's jacket and hat, Shirotae set off with Shinonome to find Ushiwaka. 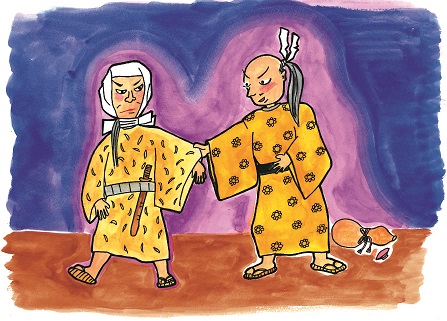 Munekiyo offered him sake as a ploy to detain them.

He then took his time to sit down cross-legged.

“I have something important to tell you. This is of value to anyone who would be a warrior.”
He affected a solemn air. 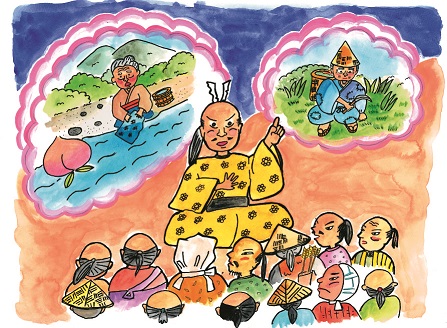 “Long, long ago there was an old man and an old woman. The old man went to the mountains to gather firewood and the old woman went to the river to wash clothes.” He began his story.

Kenmotsutaro dismissed Munekiyo.
“What? Are you trying to make fools of us? Are you drunk? Pay no attention to him.
We must move on.”

Kenmotsutaro hurried away without looking back. Munekiyo watched from behind as the figure of Kenmotsutaro shrank in the distance.

Shirotae and Shinonome caught up with Ushiwaka in the area of Tsuchiyama in Goshu,the province of Omi, but the rapid flow from the melting snow made it impossible for them to cross the Tamura River.

“Let us leave our fate to Heaven and make camp here,” Ushiwaka said, deciding they should sleep in the front hall of a shrine for the night.

By then, Kenmotsutaro, having pursued them with such vigor that he may as well have been flying,had already reached Tsuchiyama.
Seeing the great volume flowing in the Tamura River, he raised his voice, roaring as if to thunder a war cry in all directions to launch a battle.
“They must be somewhere close by. Find them!”

Thinking he could no longer escape, Ushiwaka ran out shouting,
“I am here, Minamoto no Ushiwaka of the Genji!”

Shirotae and Shinonome were with him, at his right and left. 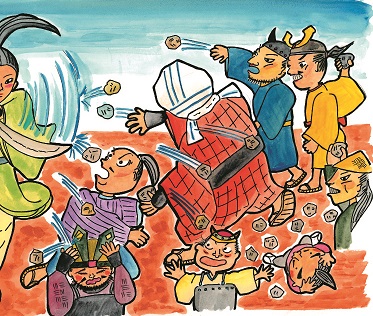 The more than 80 pursuers attacked them at once. Nimbly the three leapt over the men, fighting brilliantly.

Raigenboshi chased after Shinonome, trying to catch her.
He threw rocks that fell on her like hail. Maneuvering her halberd, she repulsed the stones thrown her way. They bounced back, pelting her enemies' foreheads, noses, necks, and crowns until the soldiers all scattered in retreat. Grappling with Kenmotsu's retainers, Shirotae severed their heads so quickly that the human eye could not discern her movements.

Ushiwaka kept fighting until he dispatched the remaining soldiers. 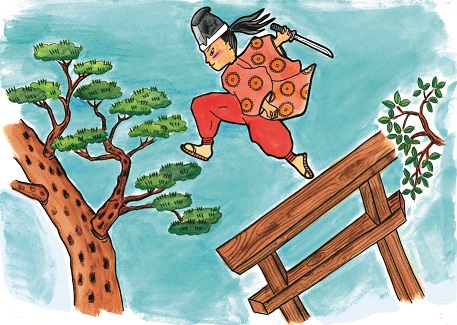 When Raigen and Kenmotsu attacked from either side, Ushiwaka leapt unto the top of the shrine gate and burst into wild laughter.

“You have so many men there! And a mere three of us here! Let's take a little break.”

He casually cooled himself with a fan in his left hand. 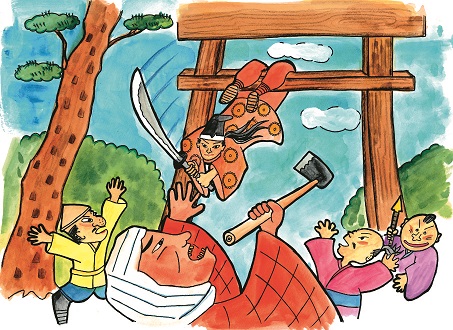 The sight made Kenmotsu furious. Taking out his bow, he shot an arrow, but Ushiwaka hopped onto a pine branch. As another arrow followed, Ushiwaka leapt easily back to the gate.

Raigen grabbed a long-handled hoe from a nearby farmhouse and began to dig at the base of the gate pillars to topple it from below.
Hanging by his legs from the lower crosspiece of the shrine gate, Ushiwaka slit Raigen's forehead with his sword. The astonished Raigen tried to flee, but Ushiwaka, brandishing his sword high in both hands, slashed his enemy in half in one fell swoop.

Quaking in fear, Kenmotsu called to the remaining troops,
“All of you! Get them! Even if you must die in the attack! Get them!” 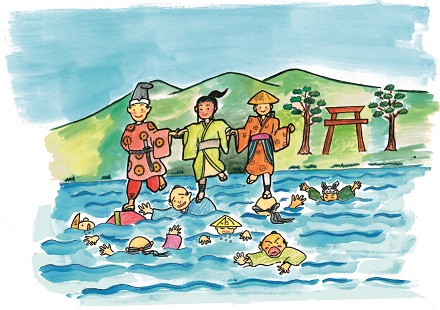 Ushiwaka praised Shirotae and Shinonome.
“You did well. I offer my gratitude. That was indeed an auspicious beginning to ruling all the country.”
Rejoicing together they hurried toward the Eastern Provinces.