The Lacquered Hat of the Genji Part1 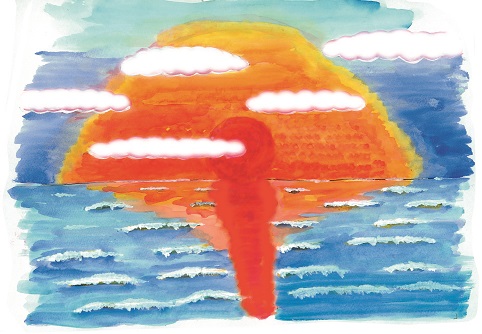 The time was the end of the Heian Period, in the 12th century.

Minamoto no Yoshitomo of the Genji, having been defeated in battle by Taira no Kiyomori of the Heike, fled the Capital, and, set out toward the province of Owari with the help of his retainer,Osada no Shoji Tadamune.

However, Yoshitomo suffered a surprise attack by Tadamune―who had turned to the Taira side―and lost his life at Utsumi in Noma. 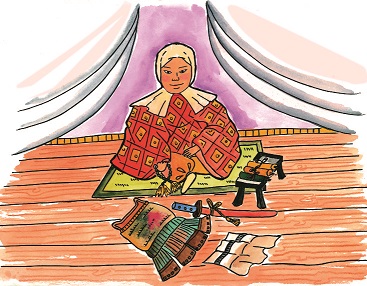 It was 1160, the beginning of the second year of the Heiji Period.

Taira no Kiyomori, accompanied by Osada no Tadamune, visited the Emperor Go-Shirakawa to present new year's greetings and to offer to his majesty a Genji heirloom sword, armor, and a scrap of the white flag of the defeated Genji.

Delighted, the Emperor rewarded Kiyomori for his meritorious deed in killing Yoshitomo.
But, out of pity for Yoshitomo, who had formerly been his trusted retainer, whose inglorious death Kiyomori had brought about, the Emperor also spoke a command. 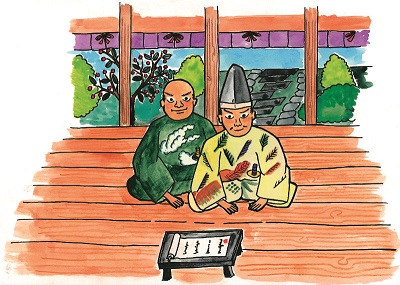 "You, Kiyomori, should erect a grave for Yoshitomo at Sujakuji Temple.
And Tadamune, who had betrayed Yoshitomo, should seek out the late man's wife, Tokiwa Gozen,and his children, and should care for them, as penance for this misdeed.

Thus, the lingering bitterness of the spirit of Yoshitomo, now buried, will be dispelled." 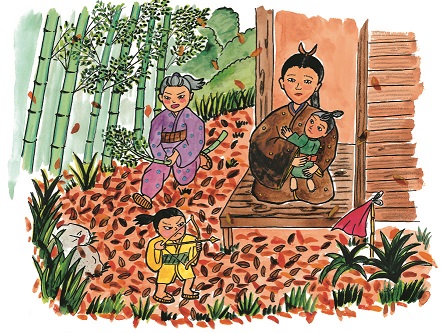 After the death of Yoshitomo, Tokiwa Gozen was sunken in grief.
Her eldest child Imawaka was nine, Otowaka was six, and three-year-old Ushiwaka was still nursing.
The mother and children led a quiet life in a house hidden among the weeds where the dead leaves lay fallen.

The eldest, Imawaka, circled around and around the garden astride a pretend bamboo horse,calling out to his mother, "Before long, I'll show you. I'll kill my father's enemy Kiyomori."
Whereupon Otowaka shot an arrow into a red cloth attached to a stick, shouting,"I have slain the Heike!"

Ushiwaka, opening his mouth wide, took the cloth in his teeth and ripped it into shreds.
"I have captured the red flag of the Heike. Hurrah!"

He clapped his hands in joy.

"If the Heike should become aware of this scene you boys are enacting, what a terrible fate would befall us!"

Tokiwa Gozen picked up Ushiwaka. "Imawaka, and Otowaka, hurry along," she scolded them.
Crestfallen, the two boys headed off to the nearby temple school for their writing studies. 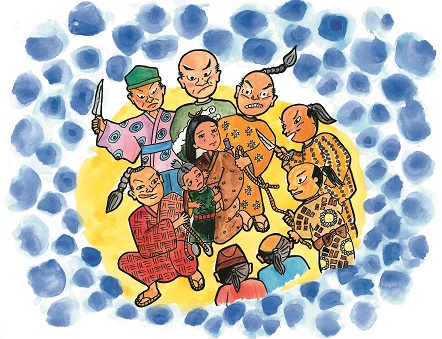 Osada Tadamune appeared suddenly at the home of the widow with a number of troops.
"Don't let anyone in the house escape. Capture them!" he shouted.
Seizing the widow and Ushiwaka, the men prepared to carry them off.

The widow screeched in anger.
"Are you Osada, who betrayed my husband? You evil, merciless fiend!
I don't care about my own life, but you must at least spare this child,in recompense for betraying your lord." She collapsed in tears.

"The emperor told me to spare you, but I was instructed by Lord Kiyomori to kill you all.
Where are Imawaka and Otowaka?"
He pressed her for an answer. The widow refused to respond.

"Do you think I would ever tell you?!" Osada had the mother and son bound and carried away. 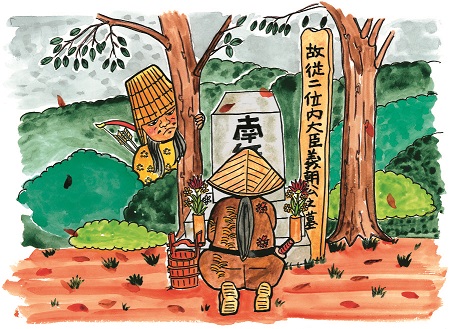 About that same time Tokuro Morinaga, who had served the Genji, was visiting Sujakuji Temple to pay respects at the grave of Yoshitomo.
There he noticed a young man in a sedge hat who was glancing in his direction.

Observing closely, he realized that it was Kon’omaru, who had lived some time ago in this temple and had served at the side of Lord Yoshitomo. Pretending he did not at first recognize him, Tokuro pressed his palms together before the grave.

Then he whispered, “You are the coward who fled without attacking Osada, though you had kept close to Lord Yoshitomo.”

When Kon’omaru heard that, he walked nonchalantly toward the reliquary of Lord Yoshitomo.

Raising his voice, Kon’omaru responded, “Being betrayed by Osada, whom he so trusted,was an utterly deplorable act. I'm now prepared to carry out my retribution for this humiliation.
The lords under the late Yoshitomo are still young, and his retainers scattered.

All that remains is a lowly underling by the name of Tokuro Morinaga, who is an all-talk good-for-nothing, a coward among cowards with a rotten spirit to boot.” 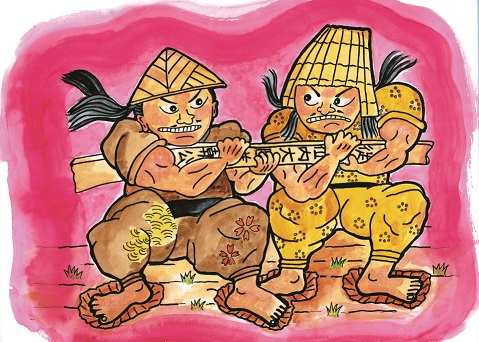 For a while they shouted abuses at each other, and, finally, unable to resist, they drew their swords.
Their bodies shuddering, their teeth clenched, each awaited his opponent's next move.

Then Tokuro burst out laughing.
“Of what use would it be to fight such a coward. It would indeed be a sacrilege to offer a weakling like you before the grave of so great a warrior.”
Thus saying, Tokuro pulled the three-meter-tall stupa out of the ground and ran off with it.

Kon’omaru chased after him. “I will not let you have it!”
He seized the stupa from his adversary. Blood throbbing in their veins and limbs struggling one above another, with muscles bulging, the two men’s bodies rose, entwining like wisteria vines on pine trees, the earth beneath their feet sinking more than 20 centimeters.
As they twisted back and forth, left and right, the massive stupa broke in half. 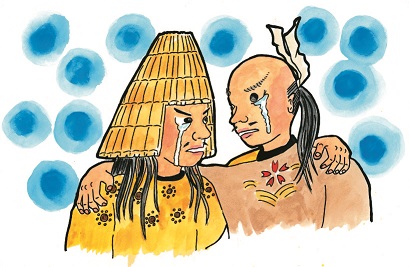 For a moment the two men glared at each other.

“You are quite an impressive fellow.”

“From here on, let us combine our wits to destroy the Heike and thereby dispel the shame of Lord Yoshitomo.”
Tossing down the stupa, they brought their faces together and shed tears. 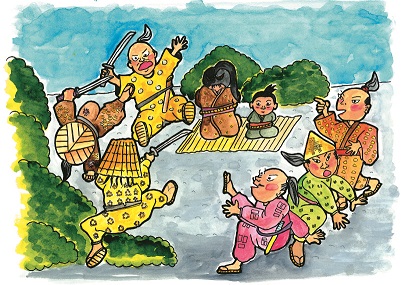 Soon, they heard a voice nearby shout, “We have the prisoners!”

Peering from where they hid themselves in the shadow of the trees,
they saw it was none other than the widow holding her son, young Ushiwaka, who had been brought to the spot.

“Your life no longer means anything. But if you promise to serve the Lord Kiyomori,the lives of your three sons will be spared. So what will you do?”

Tokiwa Gozen said, “Hurry up and cut off my head. I will sink my teeth into Osada as my head flies through the air and finally have my revenge.”

She glared at Osada's son Taro, who was responsible for bearing the sword. Her eyes overflowed with tears.

“She has made her choice, behead her.” Osada Taro trembled at the order.

His knees shaking, he walked around behind Tokiwa Gozen. The moment he lifted his sword,Morinaga and Kon’omaru leapt out, knocking Osada Taro to the ground.

“You enemy of our Lord! Know now what is to become of you!” They slew him on the spot.
The guards scattered in all directions, fearful of the overwhelming might of their opponents.
Morinaga and Kon’omaru set Tokiwa Gozen free. Vowing to destroy the Heike, the pair departed gather to their troops.